The Clark Zapper has not been licensed by the US Food and Drug Administration as a medical device for use in the cure, mitigation, treatment, or prevention of any disease. It can only be sold as an experimental device. If you are pregnant or wearing an electronic pacemaker, please do not experiment with a Clark Zapper. All information is for educational purposes only. Consult a licensed health professional before attempting any self health program. Dr. Hulda Clark defines a Zapper as any unit that generates a positive offset frequency between 10 Hz and 500,000 Hz using a 9-volt battery. For more information, please read the books by Hulda Clark.

About the Hulda Clark Zapper 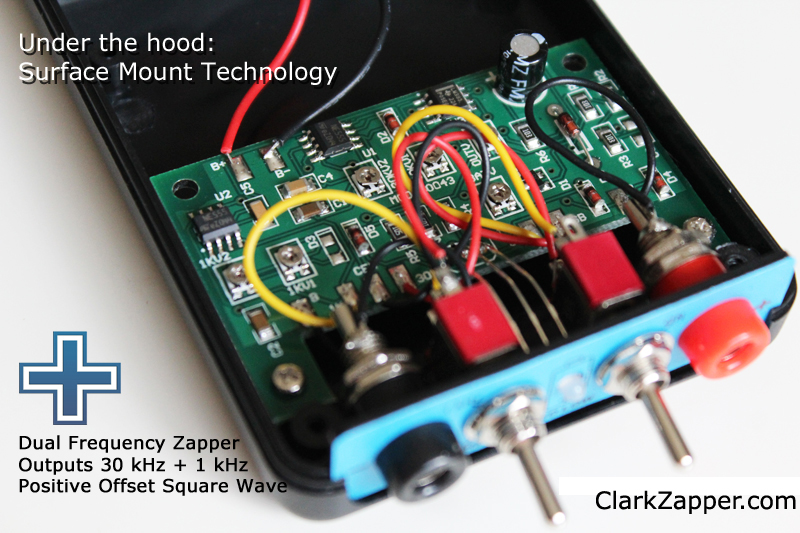 What is a Zapper? Research Scientist and Author, Dr. Hulda Clark invented a simple 30 kHz positive offset frequency generator combined with copper handles and called it a Zapper. Zapping is considered experimental, which means that the science has not been evaluated or licensed by the FDA. Read the latest books by Hulda Clark to learn about the many ways Dr. Clark experimented with a Zapper.

How do I zap? Here is a video that shows you how to zap.

I don't feel anything when I use my Zapper, should I? Not really. Some people can feel a slight tingle, but most people don't feel a thing when they zap. There is no discomfort. Just sit, relax, and zap. It is also smart to test a zapper (especially a homemade zapper) on a voltage meter if you question its output. All of our units are hand-tested just before they are shipped.

NOTE: The voltage output should be about 8 volts with a fresh 9 volt battery. However, a voltage meter will only read about 4 volts (zapper's square wave has a 50% duty cycle so meter displays an average voltage between 0 & 8 = 4). Whatever your voltage meter reads, multiply it by two. That is your zapper's voltage output.

Do you carry wrist cuffs? No, we don't believe they work well. Hulda Clark published that she did not use wrist cuffs when zapping. Because our Zapper is made exactly to Dr. Clark's published designs, we adhere to the use of highly conductive copper pipes as the handholds. Here is a quote from Dr. Clark to support this:

"Although wrist straps are convenient, not enough research has been done to accurately compare effectiveness with the tubular design of electrodes... A person should use the copper tube electrodes, of correct dimension, correctly placed, and not risk poor conductance."

- an excerpt from Dr. Hulda Clark's 2003 update on zapping

What zapper should I get? Over the years we have sold several different brands of Hulda Clark Zappers. When we were deciding on which brand to offer our customers, we chose the device closest to Dr. Clark's published design. Too many other Zapper designs seem over-complicated or had too many modifications from her original published schematic:

If you would like to follow the published experiments described in Dr. Clark's books, the Frequency Generation brand Zapper is a great choice. It has been tested rigorously to guarantee positive offset square wave frequency output, with no negative spikes, as specified in Dr. Clark's books.

Why a 9 volt battery? Can't I plug it into a wall adapter? There are zappers that have 9 or 12 volt AC adapters, but Dr. Clark insisted on the use of a 9-volt DC battery, and to NOT use an AC adapter for safety reasons. A more economical and environmentally friendly option is to purchase rechargable 9-volt batteries and a Battery Charger.

Can I use the Food Zappicator to zappicate teeth? Yes. Make sure you have no metal dentistry or jewelry in your head and neck area. Hold the face of the North Pole Speaker Box (connected to the Zapper unit turned on at 1kHz) against the cheek of the tooth you would like to target. Treat for a minimum of 15 minutes.

Do I need a zapper that emits all of the frequencies in Hulda Clark's frequency list? No. Hulda Clark began her research selectively zapping individual frequencies at a time but discovered later that the positive offset square wave regardless of frequency accomplished the same task all at once, making her earlier work of using specific frequencies obsolete. She published her frequency list from her earlier research so that future scientists can replicate her journey, but Hulda Clark's true innovation in the field of electrotherapy is simplifying the previously large complicated devices made by her predecessors and bringing us a portable easy to use Zapper for home use.

What about Parasites, Viruses, & Bacteria? There are a lot of politics and laws about what a merchant can state when selling experimental devices such as a Hulda Clark Zapper. Let us try to explain.

Because Dr. Clark does not manufacture Zappers, Herbs, or Supplements, she can state whatever she believes in the books she publishes. It is considered free speech. Although her research and experiments have benefitted hundreds of people over the years, the Hulda Clark Zapper has not been evaluated by the US FDA. Without a double-blind study approved by the FDA, any claims that the Hulda Clark Zapper kills parasites, viruses and bacteria are considered unsubstantiated.

Here in the US, merchants who make unsubstantiated claims are commiting a big offense. Many zapper manufacturers have been put through costly legal action because of advertising such claims.

As merchants, we cannot make any statement that can be construed as medical claims or medical advice. When purchasing a Hulda Clark Zapper, we recommend avoiding any merchant or company that makes these or other unsubstantiated claims. It's just a matter of time for the FDA and FTC to catch up with them. If you want to purchase from a business that will be there for years to come, be sure to shop from a site that is not breaking these simple laws.

What about other frequency devices? There is a long history of Frequency Oscillations being used in research that is similar to Dr. Hulda Clark's published experiments. Here are a few links:

Several US Patents exist that are of interest:

Can I build my own Zapper? Yes, it's rather easy to build your own zapper. If you have a few basic tools and consider yourself to be a bit handy, building a zapper will be great fun for learners of all ages. Handmade zappers also make great gifts. Watch video instructions to build a Hulda Clark Zapper and Accessories.